It was back to Boardwalk Hall for rehearsals on Saturday morning.  When we arrived, we enjoyed a delicious breakfast catered by Bocca Coal Fired Bistro in Margate, New Jersey (coffee included, praise) before jumping into reviewing walking formations.  The Badgers won their home opener the night before, so naturally I was sporting my Bucky t-shirt and Wisconsin sweatshirt.  “We learned a speaking intro today at rehearsal that entails us, as candidates being broken down into smaller groups to read our new mission statement as an org. – followed by us clumping together at the center stage to say, in unison, “We are Miss America 2019!”‘

For the first time since arriving Tuesday, we rotated through leaving rehearsals for filming on the boardwalk and beach for the live telecast.  In the past, viewers at home would’ve seen these snippets during the live parade of states at the top of the show which featured each woman saying a quirky fact about her state.  This year, the production team filmed for filler spots during the broadcast on Sunday, September 9.  While our group’s videos didn’t make it on the telecast (to my knowledge) it sure was fun stepping out into the fresh air, soaking up the sun, and taking photos with the Mallory Hagan, Miss America statue! 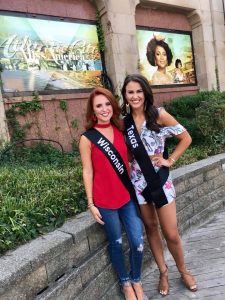 After filming, we changed quickly to board our jitneys and make the drive to the Linwood Country Club for an evening of golfing, delicious dinner, and mingling with community members. 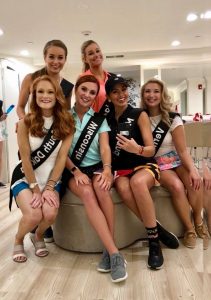 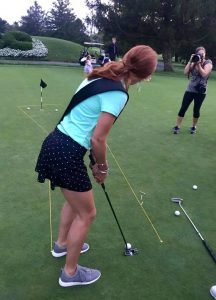 We broke into our competition groups (Sigma, Alpha, and Mu) and rotated through three stations: putting, chipping, and the driving range.  Following our tutorials we were ushered upstairs to the beautiful white wall, floral print bridal suite that was recently redone (pictured left) to freshen up for dinner.  Naturally, that included a number of photo ops too because when you get a group of 51 women together that’s what happens my friends; especially in a bright room with new wood floors and lots of mirrors.

Sunday began with a 6 AM alarm, me organizing my suitcases and tote from rehearsal.  I showered off my day two hair (full of dry shampoo) and decided to forego the hair products and curling irons for some natural waves with my Miss Wisconsin 2018 baseball cap. 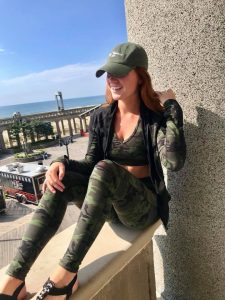 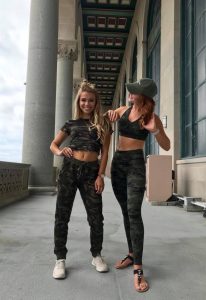 live parade of states multiple times today and blocked through the prelim nights as far as Red Carpet walking pattern, On-Stage Question, and entering and exiting stage.  I was able to take a power nap after we broke for lunch and after I finished my lunch talent rehearsal 0 we get ten minutes in rotation over lunch to dance, sign, practice the piano, etc.”  We broke from rehearsal and had an hour down time to relax, change, and get ready for our spa night at Caesars’ Qua Baths & Spa.  When we arrived at the spa, we took photos outside on the rooftop with staff before going through the food line and beginning a variety of services.

They offered us hand paraffin wax treatments, arm, neck and shoulder massages, and full use of the hot tub, sauna, and steam rooms.  It was nice to simply enjoy one another’s company while honing in on the moment and taking some time to be appreciative for the experience.  A special thank you to the Caesars staff for having us!

Want to book Miss Wisconsin for an upcoming event, judging opportunity, school engagement, parade, or corporate function?  Head to the Miss Wisconsin Appearances tab on our website and submit a contract request or send an email to booking@misswisconsin.com for more information!  We look forward to hearing from you!

An official state preliminary to the Miss America Scholarship Competition