The Show Us Your Shoes Parade has been a highly anticipated part of the Miss America Organization since the 1970s.  While the details on its origin are uncertain, it’s said that it began when spectators observed that some of the women were wearing elaborate footwear, others none at all and so the phrase, “Show us your shoes!” quickly caught on. 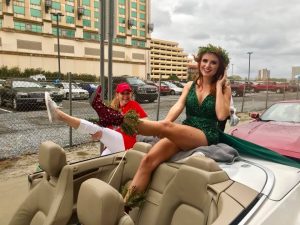 For the past few years, I had a distinct vision on what my shoes would be if I were to win the title of Miss Wisconsin.  Being from Wisconsin Rapids, I wanted to highlight the cranberry industry in our state.  Did you know, Wisconsin produces roughly 60 percent of the world’s cranberries with the majority of them coming from Central Wisconsin?  Cranberries were designated as Wisconsin’s official state fruit in 2004 and they’re our state’s largest fruit industry both in value and size!  I found the maroon colored booties for the basis of my shoes online, ordered them, in addition to countless Swarovski crystals, and hunted down artificial cranberry vines before starting to cut and glue my costume together.  My mom and I found an emerald green, all sequin gown at Charlotte’s Bridal in La Crosse which was altered into a romper with a satin attachment by Miss Wisconsin’s Vice President, Dave Alban.  If you live in the Oshkosh area and are in need of an alteration, call Alban Ltd.  Dave even made my Wisconsin skirt vision come to life when he made free-hand cuts to create the state of Wisconsin out of white satin to attach to my detachable skirt (seriously, how talented is he?!).

Amidst interview prep, daily workouts, talent rehearsal, appearances, and lots of traveling, I slowly made my vision for my Show Us Your Shoes Parade outfit come to life.  I would come home, turn on a movie and sit down in my room with super glue in one hand and tweezers in the other, gently placing gems onto my shoes one by one.

When Saturday, September 8 finally arrived, all of us arrived at Boardwalk Hall in the morning just as we had the ten days prior.  This time, walking through rehearsal with Carrie Ann Inaba and filming for the live telecast’s introduction before breaking to get ready for the parade.  It was gloomy and raining, but there was no amount of precipitation that could rain on our parade.  We were allowed one person who could ride with us during the parade, I had asked my mom two months prior by creating “Mama Wisconsin” sneakers for her and popping the question in a rather bridesmaid proposal format.  My mom, along with everyone else’s guests met us in the parking garage below Boardwalk Hall before being shuttled to the start of the parade route.  The parade itself was a dream come true.  People were lining the boardwalk cheering in excitement and waving as we made our way down the rickety, wooden stretch.

As we approached the group of my family members, friends, and Miss Wisconsin Scholarship board members, my eyes were flooded with tears.  Seriously, I don’t think there’s an accurate way to describe the amount of love and appreciation that filled my heart in that moment.  After a stressful, but extremely thrilling past few days the people that mean the most to me were gathered in one spot overjoyed to see me.  What made the moment even more special was my Oktoberfest Festmaster, Brad Sturm leading an “Ein Prosit” toast to me (Note, Miss La Crosse/Oktoberfest 2012 was my first local title within the Miss America Organization).

A special thank you to Mandi Horstman for creating my cranberry vine head wreath, Denise Watrous and Meghan DeMore for ensuring I had my crystals ordered for my outfit, Mandi for assisting me in gluing the remaining gems onto my boots, and my mom for helping me glue on patches and crystals when the ‘crunch time’ set in, in addition to helping me pack and transport my costume to Atlantic City!  As the saying goes, it takes a village and I’m especially grateful for each and every individual who has encouraged me, helped me, and supported me not only during my year as Miss Wisconsin, but throughout my journey within the Miss America Organization.

Want to book Miss Wisconsin for an upcoming event, judging opportunity, school engagement, parade, or corporate function?  Head to the Miss Wisconsin Appearances tab on our website and submit a contract request or send an email to booking@misswisconsin.com for more information!  We look forward to hearing from you!

An official state preliminary to the Miss America Scholarship Competition